Contacting Customer Services: We're receiving a large volume of calls and emails at the moment, so it is taking us longer than usual to respond to enquiries

Our Customer Services Team are currently receiving a large volume of calls and emails at the moment, so it may take us longer than usual to respond to your query. Please can we ask for you contact us by email at service@raisin.co.uk, or send us a secure message via your Raisin UK Account, to allow us to prioritise our phone lines for any vulnerable customers who need to talk to us.

We apologise for any inconvenience this may cause. If you have already contacted us, please be reassured that we will respond as soon as we are able to.

We apologise for any inconvenience this may cause.

Being filthy rich doesn’t always mean that you’ll be a happy person, or does it? More money affords you more opportunities and having a decent savings pot can alleviate some of the stress of day-to-day life, but to what extent does money affect our happiness?

We then used GDP data to calculate the number of millionaires and billionaires in some of the largest countries around the world and compared this to data from the World Happiness Index to reveal which country is the happiest vs the amount of wealth that country has.

Winchester is the happiest city in the UK!

Coming in at number one on our list was the city of Winchester in the South East. Winchester had one of the highest happiness ratings of our entire ranking which, combined with a life expectancy of 83.6 years, gave the city a happiness index rating of 104. The average salary for people living and working in Winchester, or in this case the cost of happiness, is £35,346.

In second place is Lichfield located in the West Midlands. The Staffordshire city received an overall happiness index rating of 100 thanks to its life expectancy of 81.9 years and a happiness rating of 23.8. The average salary in Lichfield is £33,360, meaning happiness costs £1986 less in Lichfield than Winchester.

Following closely behind is Chichester, another city in the South East. While the happiness rating for Chichester is the highest within the top three, and life expectancy is 83 years, the average salary is lower than both Lichfield and Winchester, resulting in a happiness index score of 99.

Cambridge, St Albans, Chelmsford, Perth, Edinburgh, Derby and Bath all made the top 10 list based on cities where money does buy happiness in the UK. Based on these results, the average happiness score of the top 10 happiest places was 23.6, with an average life expectancy of 82.2 years! The average salary of the top 10 cities, which are the happiest according to our data, is £33,864, suggesting that people in the UK are happiest if they are earning over £30k.

Where does money buy happiness around the world?

Using Gross Domestic Product (GDP) data, we were able to gain an economic snapshot of (almost) every country across the world. We analysed this data to estimate the size of the economy and income per capita by dividing the country’s current economic wealth by its population, and then we compared it to The World Happiness Index.

Luxembourg is revealed as the country in the world where money can buy the most happiness!

Coming up top is Luxembourg with an overall happiness score of a whopping 292 thanks to its life expectancy of 82.1 years and a Happiness Index rating of 1.5. 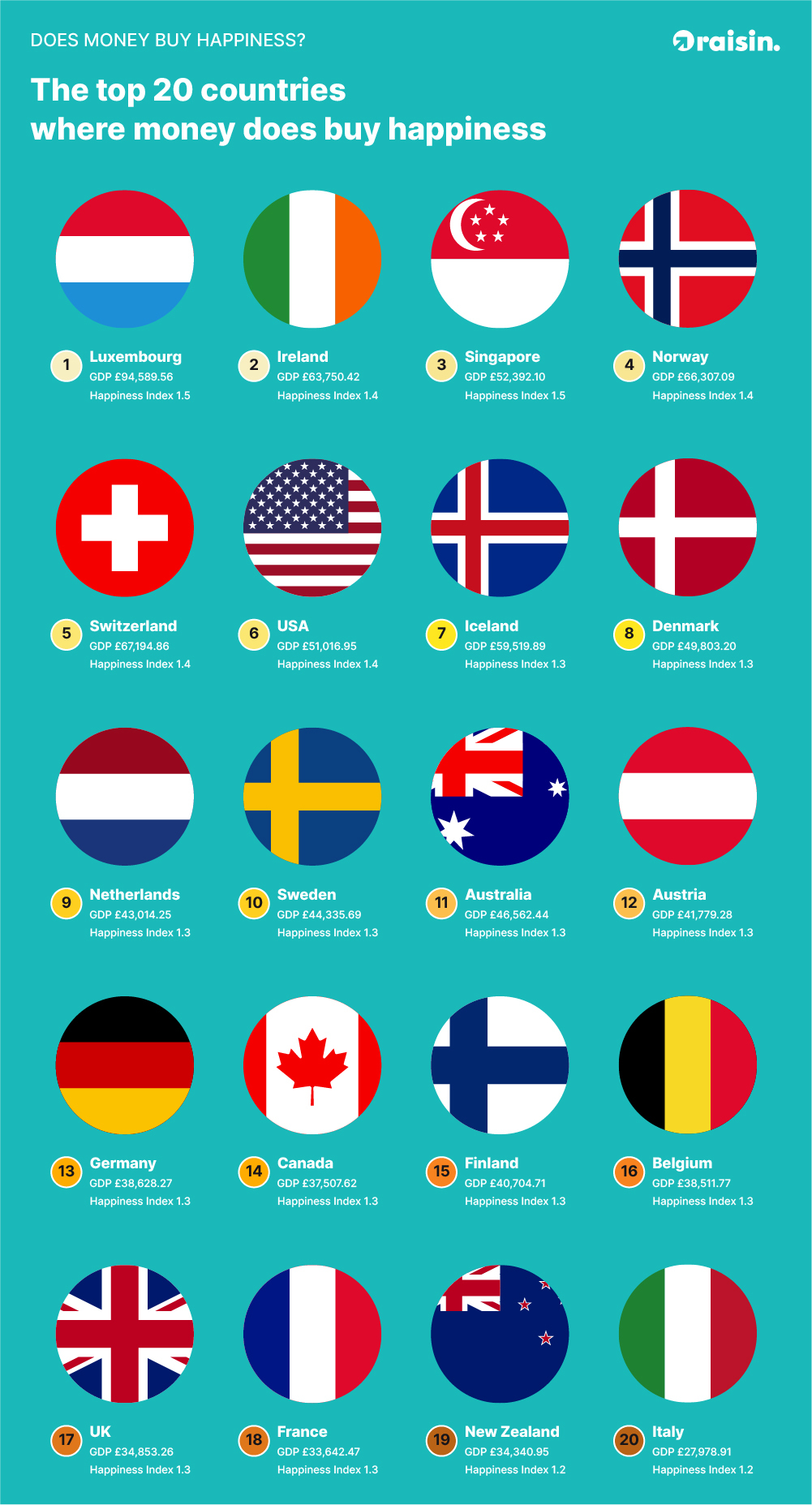 The average salary of the top 10 happiest countries in the world is over £64,000

Kevin Mountford, Co-Founder of Raisin UK, said: “While our research suggests money can help ease the stresses of daily life, leading to a longer life expectancy and subsequently allowing you to buy happiness, it’s not always the case in real life. Our research can help you decide which city across the UK and country in the world to live in to maximise your chances of being the happiest you possibly can, but it’s up to you to make your own happiness.”

How to keep your savings safe

Kevin Mountford co-founder of Raisin UK In an unpredictable world, it’s only natural to want to keep your…

Do the high-achievers of Britain’s universities become high-earners?

Photo by Joshua Hoehne on Unsplash With the average student in England totting up a whopping £40,800 wort…