What does austerity mean?

Governments use austerity measures as a way of reducing their debt. Austerity serves as a stabiliser that can both slow economic growth and help avoid a debt crisis. However, governments don’t usually turn to austerity unless forced to do so, as it can have a major impact on a country’s economy. On this page, you’ll learn everything you need to know about austerity and how it has affected the UK economy.

By definition, austerity is a set of economic policies a government imposes to control public sector debt. Governments usually implement austerity measures when this debt is so large that the risk of being unable to make repayments is a real possibility.

The chart below shows the UK government’s net borrowing since 1993. As you can see, the austerity measures implemented following the financial crash in 2008 have helped reduce the rate of borrowing. 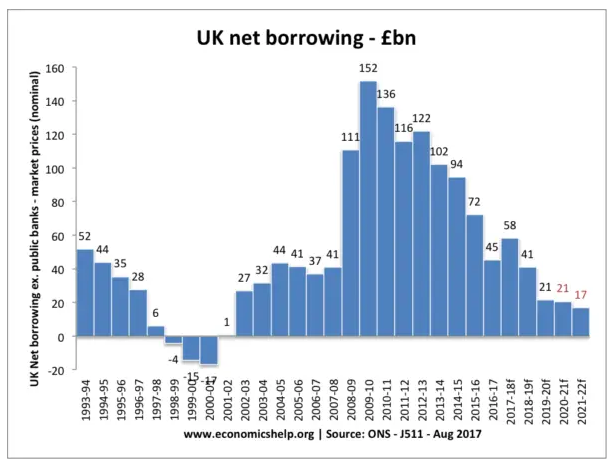 How does austerity work?

What are examples of austerity measures?

The following are examples of austerity measures that different countries have undertaken in a bid to reduce the national debt:

How is austerity implemented?

What are the risks of austerity?

The goal of austerity is to reduce government debt. Still, many people debate this measure’s effectiveness, arguing that a massive deficit can have a greater impact on the economy.

What is the effect of austerity on tax?

Most economists and policy analysts agree that raising tax increases a government’s revenue. Many European countries raised taxes under austerity measures, such as Greece, which increased VAT to 23% in 2010 and imposed an additional 10% tariff on imported cars.

How has austerity affected the UK?

A crippling downturn for the economy, austerity in the UK began in 2010 as a government response to the 2008 financial crisis. Austerity measures were imposed as a way of eliminating the budget deficit.

The effects of austerity in the UK have led to increased levels of poverty and unemployment. According to the United Nations, the government has announced more than £30 billion in cuts to welfare payments, housing and social services since 2010. The British government cut over 200,000 public sector jobs in 2011, with people of colour, particularly women, being disproportionately impacted by job cuts because they are more likely to be employed in low-paying, public sector jobs or unsecured work.

Although the British government has disputed these findings, demand for food banks has almost doubled, and some families receiving benefits are now thousands of pounds worse off. Some research has even suggested that the crime rate has also increased because of cutbacks to the police force.

In 2018, then-British Prime Minister, Theresa May, announced her intention to end austerity in the UK once the country left the EU after Brexit in 2019. While austerity measures have eased, delays to Brexit and the global pandemic have both impeded a true end to austerity.