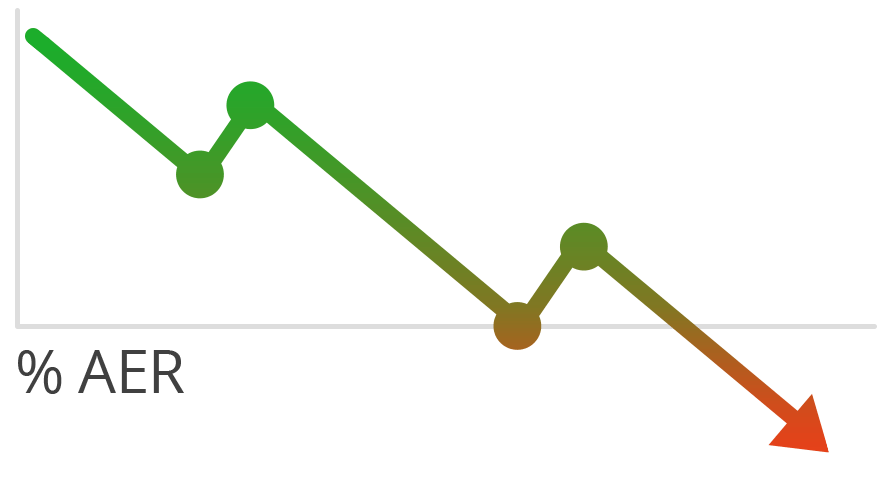 What’s on this page

What’s on this page

What are negative interest rates?

How do negative interest rates work?

When the national base rate drops to a negative figure, banks incur a charge for holding their cash in the central bank, the Bank of England in the UK, rather than earning interest. This means banks then decide whether or not to pass this cost on to their savers.

Monetary policy is how central banks control interest rates. Central banks operate in almost every economy in the world, controlling the cash supply for their respective economies. A central bank’s primary purpose is to control inflation rather than the economy as a whole.

Keeping inflation at the optimum level of around 2% is a tricky balancing act. If everyone pumps their money into the economy and takes out loans and credit cards, inflation can rise too high, resulting in central banks increasing interest rates to control it.

If they increase interest rates too much, however, and nobody wants to spend or borrow because they are so high, inflation drops too low.

As a result, central banks might decide to drop their interest rates and encourage people to spend again – sometimes resulting in negative interest rates.

Which countries have negative interest rates?

Following the global financial crisis of 2008, interest rates were cut around the world. The European Central Bank (ECB), the US Federal Reserve, the Bank of England and the Bank of Japan cut interest rates to almost zero, and in June 2014 the ECB cut its rate to -0.10%. Switzerland, Sweden, Hungary and Japan have since followed suit.

In some European countries such as Germany and The Netherlands, banks are passing on the ECB’s negative interest rates to their corporate and retail customers.

Over the last few years, banks all over the world have started using negative interest rates, as seen below [2].

An example of a negative interest rate

While it’s commonly thought that negative interest rates are a relatively new concept, they’ve actually been around for quite some time. Negative interest rates were used as a tool to kickstart the economy immediately after World Wars I and II, the latter at a time when the causes of the Great Depression were still being explored.

Low and negative interest rates were used in both the UK and the US after World War II to pay off war debts. These interest rates, coupled with increased pressure to purchase government bonds, was used as a model for financial recovery.

At the end of World War II, Britain’s government debt was more than twice as high as the GDP, and the Americans’ was almost 120% of their GDP. Ten years later, the percentages were only about half as high.

How can interest rates turn negative?

Interest rates can turn negative in times of great economic recession. Central banks in economies across the globe can make this decision to encourage populations to spend money and stimulate the market.

Why are negative interest rates being used?

Negative interest rates are an unconventional way of trying to stimulate economic growth by making it cheaper to borrow and therefore boosting spending and investment. If successful, negative rates could help prevent a global recession while easing the burden of debt that many economies are under.

What are the effects of negative rates?

Negative interest rates affect the economy, and within that, consumers, borrowers and lenders, in various ways.

What are the economic effects of negative interest rates?

Negative interest rates can affect the economy in the following ways:

What are the effects of negative rates on consumers?

In theory, negative interest rates mean that consumers – both individuals and businesses – won’t earn as much interest on their savings as they once would, or the value of your savings will decrease. However, some banks have helped to ease this burden. In countries with negative interest rates, although banks may pass their costs on to savers who hold deposits with them, to date, few banks have done so.

In simple terms, negative interest rates mean borrowers benefit, while savers don’t. This is because borrowers effectively pay less back than they originally borrowed, while savers might have to pay their bank to keep their money for them.

In some countries, such as Denmark, banks actually offer negative interest rate mortgages, where the investors take the hit rather than the banks themselves. The UK has ruled out these kinds of mortgages.

After World War II and the 2008 financial crisis, negative interest rates proved to be a valuable tool – when used sparingly. In the wake of the coronavirus pandemic, some countries, such as the United States, opted to steer clear of adopting such methods due to the mixed evidence on whether they really work.

Who benefits from negative interest rates?

Will negative interest rates happen in the UK?

As of February 2021, that work is still in progress and may be for some time. Once the Bank is satisfied that negative rates are feasible, introducing negative interest rates will be decided by their Monetary Policy Committee (MPC), which will determine whether they are the optimal tool to use in the UK at that time.

Although the base interest rate in the UK is not negative, it has been on a downward trend over the last few years and was cut to 0.1% in March 2020. Interest rates on certain savings accounts such as ISAs are low, so you may be wondering where to look for competitive interest rates.

This is the view from Raisin UK’s co-founder and savings expert, Kevin Mountford:

“Talk of negative interest rates has been around for some time now, and recently the Monetary Policy Committee (MPC) asked banks to use the next six months to prepare for such an event. While it’s right to consider negative interest rates as part of the monetary policy tool kit, it’s still far from a done deal. The UK has never operated in a negative interest environment and there are still a number of challenges to overcome, ranging from bank system capability, UK consumer attitudes and, of course, whether it will have the desired effect.

That effect is that negative rates would provide cheaper borrowing and act as a disincentive for savers, which would get us to spend some of the cash we have been squirrelling away during the pandemic. In reality, the competitive nature of the UK market means that it’s highly unlikely UK retail savers will have to pay banks for the privilege of looking after our money. We only have to look to continental Europe and the likes of Germany to see that negative savings rates have only really hit higher value corporate deposits.

In summary, it’s important to continue to save and seek out the best value products, and not be alarmed into thinking you’ll need to keep cash under the mattress.”

You can guarantee a risk-free return on your deposit by opening savings accounts with a fixed interest rate, such as fixed rate bonds. If you have a lump sum you’d like to invest and can afford to lock your money in for a set period of time; you’re more likely to earn a competitive interest rate.

How to open a savings account at Raisin UK

To open savings accounts from our partner banks, you first need to open a Raisin UK Account; then you can apply in just three steps:

Once your application is approved, simply deposit your savings and start earning money straight away.

If you’ve got any questions, please contact our UK-based Customer Services Team, who will be happy to help.

Receive specially curated news and articles, and be the first to hear about exclusive rates and exciting offers when you sign up with us.