The highest paying degrees in the UK in 2021

Photo by Joshua Hoehne on Unsplash

With the average student in England totting up a whopping £40,800 worth of debt from their university degree*, how much you could take home in your pay packet once you graduate is a big deciding factor when choosing what and where you’re going to study.

Using data from Adzuna and the HESA (High Education Statistics Agency) Graduate Outcome survey, we unveil the top universities where you can get the most bang for your buck, as well as the courses that will lead to the highest salaries.

So which universities come out on top for high-earning grads?

Oxford and Cambridge graduates heading for the biggest salaries 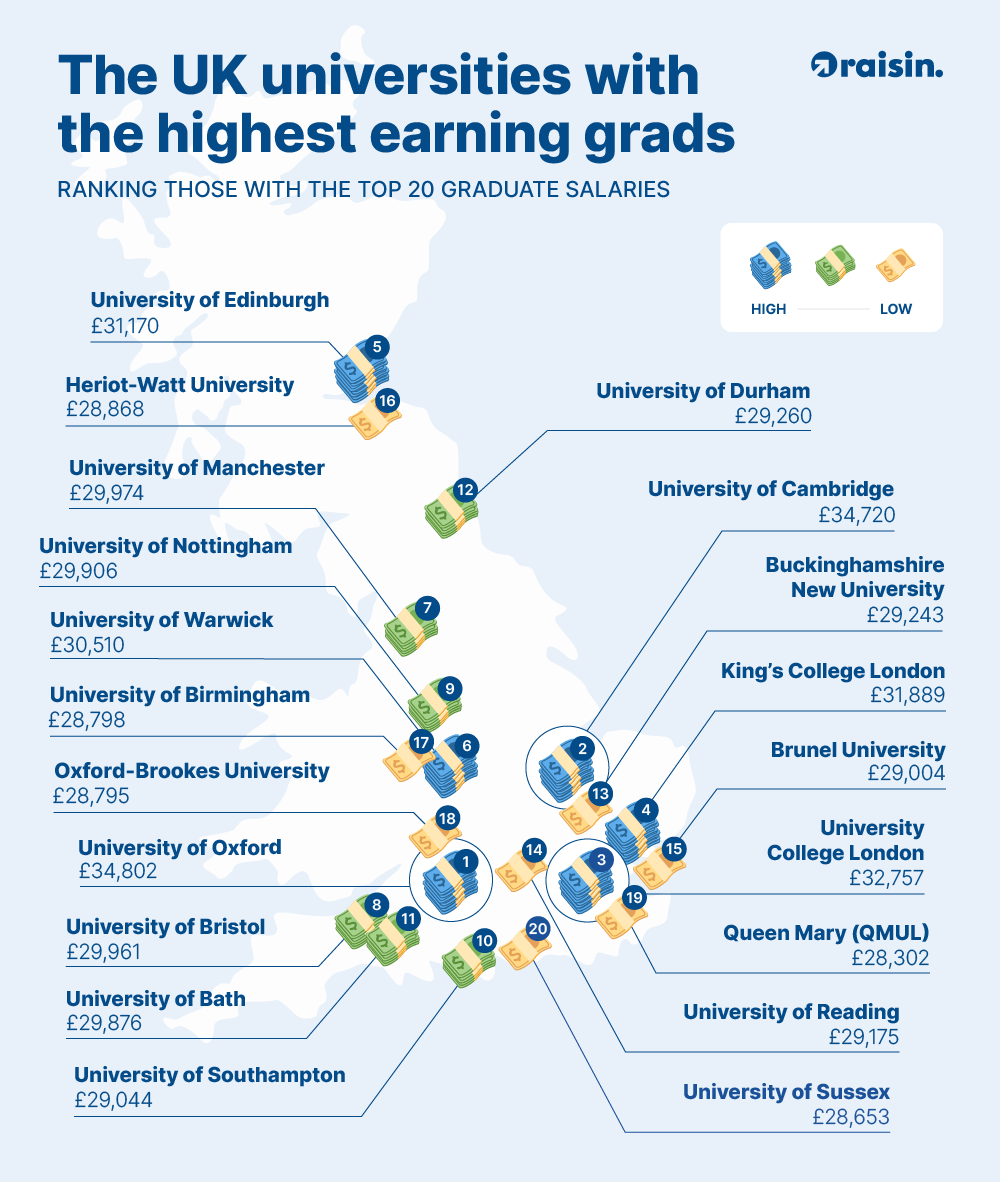 Graduates of the prestigious University of Oxford can expect to be earning an average salary of £34,802 within five years of graduating. The UK’s second-oldest university, the University of Cambridge doesn’t trail too far behind, with graduates expected to earn an average of £34,720 annually after graduating.

Our capital city is a high earner hot spot too. Although this could be in line with the London cost of living, with graduates from the University College London on track to earn £32,757 and neighbouring students at King’s College London expected to earn an impressive £31,899.

The Scottish capital of Edinburgh also makes it into the top five, with graduates expected to earn an average annual salary of £31,170 within five years.

When it comes to the courses that produce the graduates with the highest earnings, unsurprisingly medicine and dentistry come in first, with 47% of the students surveyed going on to earn over £39,000. Both fields require many years of self-investment, incurring university fees alongside intense study and job pressure, but in return yield higher salaries and career progression.

The top 20 highest paying degrees in the UK

Ranking the percentage of students going on to earn over £39,0000:

With 19% of graduates going on to earn over £39,000, engineering and technology is a core subject area that produces high earners, along with combined courses with 18%. Combined courses are when a student studies parts of two degrees in parallel, bringing a mix of skill sets to the table that makes your self-investment pay off in the future.

Which degree subject salaries have increased faster than inflation?

Understanding which degree subjects and universities produce the highest-earning graduates is integral to the decision of what and where to study, but equally important is understanding whether the average salary for your field of choice is growing slower than the rate of inflation.

Are salaries growing in line with general inflation

Although the difference is minimal, students of all the academic subjects within our research won’t see their salaries grow in line with the general rate of inflation. At the top end of the scale, medicine sees a minus £75.80 difference between actual salary growth to what it should be in line with inflation. So although as a degree subject it produces the highest-earning graduates, the salary growth over time could be slower than some other professions and industries.

How can you save for your future?

Choosing your university path is such a huge choice and not a decision that should be taken lightly. Prospective students can call on their dreams to influence their choices, but it’s also important to be aware of how your choice can impact your finances and lifestyle in the long-term.

At Raisin UK, our marketplace is home to a range of savings accounts, including fixed rate bonds, notice accounts and easy access savings, that could help you prepare for your future.

Using the HESA (High Education Statistics Agency) Graduate Outcome survey, we were able to look at the characteristics of graduates. Here we utilised the information on the earnings of those graduates and their degree subject area, as well the universities attended.

For the universities that produced the highest-earning graduates, we did not include places where less than 100 students were surveyed.

Which UK cities are the best to invest in? Data reveals the perfect locations to start a business or buy a house

Location is a fundamental aspect of investing in a business or buying a home. From consumer demand, compe…